What are the Health Benefits of Matcha Tea?

Amongst its many health benefits, matcha…

Matcha tea is an easy and simple way to add powerful health benefits to your everyday diet. One of the major health benefits of matcha tea is that it delivers a mega dose of antioxidants in every sip. According to the latest innovation in antioxidant research, matcha is packed with exponentially more antioxidants than any other ‘superfood’. 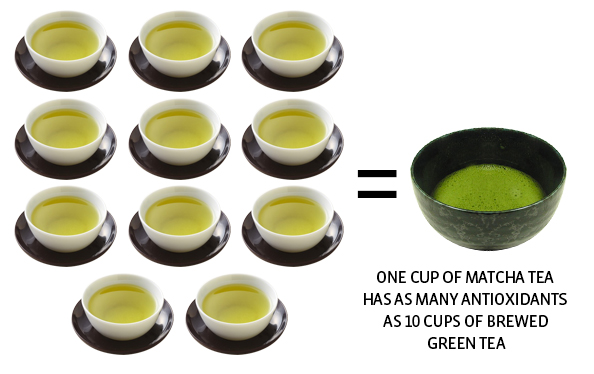 Why is matcha better than loose leaf tea?

Every day, countless people throw away valuable antioxidants and minerals. While seemingly unimaginable, that’s exactly what happens when you brew a cup of green tea because water can only extract a fraction of green teas benefits. The majority actually remains unused, trapped in the tea leaves. In reality, the only way to truly take advantage of green teas full potential is to consume the entire leaf. But that doesn’t mean you need to start eating tea leaves. The simplest solution is to just enjoy a bowl of matcha. Because matcha is straight, stoneground tea leaves, matcha provides you with green teas powerful arsenal of vitamins, minerals, antioxidants, and amino acids in a way no other green tea can.

In fact, to even begin to match the potency found in a single serving of matcha, you would need to drink at least ten cups of brewed green tea. When it comes to helping you achieve and maintain optimum health, matcha is without equal. 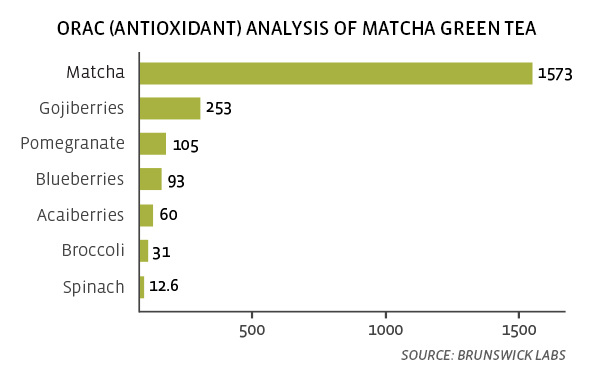 Why is matcha tea considered an anti-oxidant powerhouse?

One of the biggest buzz words in nutrition, antioxidants are naturally occurring chemical compounds that prevent aging and chronic diseases. Nowadays, a variety of fruits and vegetables are lauded for their antioxidant properties, leading to a host of products with all kinds of claims. But matcha is unparalleled in comparison. Firstly, matcha is packed with exponentially more antioxidants according to the latest innovation in antioxidant research.

Why does this matter?

Antioxidants are the body’s defense agents. They are chemical compounds that prevent aging and chronic diseases. Put simply, the more you have, the better equipped your body is in the fight against infections and disease.

What are green tea catechins, and why are they so important in anti-cancer diets?

Most importantly, EGCg and other catechins counteract the effects of free radicals from the likes of pollution, UV rays, radiation, and chemicals, which can lead to cell and DNA damage. Since over 60% of the catechins in matcha are actually EGCg, a daily matcha regimen can help restore and preserve the body’s integral well-being and balance. 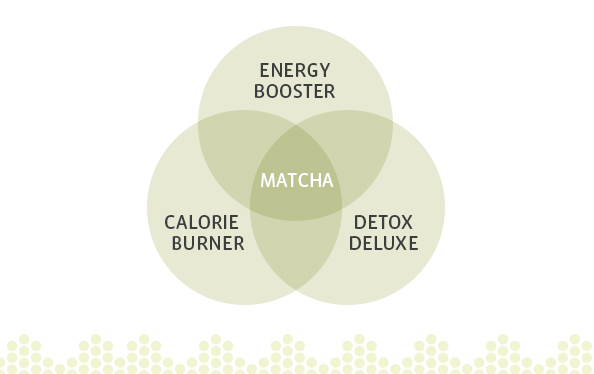 Already nearly calorie free, matcha is a great addition to a weight loss program by tackling the problem from both sides. It boosts metabolism and burns fat. One recent study even suggested that matcha may help burn calories by four times. At the same time, matcha does not put any stress on the body. It doesn’t raise blood pressure or heart rate, making it a safe alternative to questionable quick fixes or pharmaceuticals ridden with side effects.

A study featured in the American Journal of Clinical Nutrition found that consuming matcha green tea can increase thermogenesis (the body’s own rate of burning calories) from a normal 8%-10% of daily energy expenditure, to between 35% and 43% of daily energy expediture. 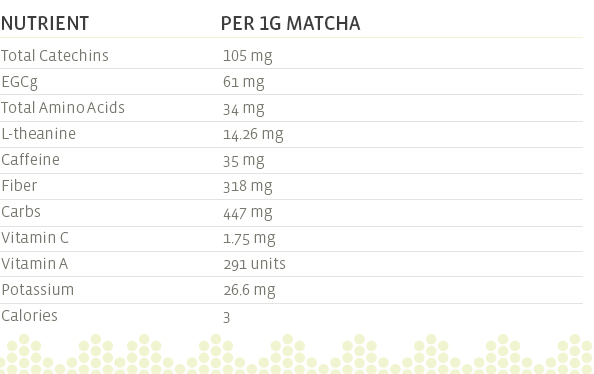 How does the amino acid, L-theanine, help me concentrate and focus?

Over a thousand years ago, matcha came to Japan as an aid to meditation practice. During long hours of sitting, monks would drink matcha to remain alert yet calm. Modern science has recently confirmed the lessons of centuries of tradition. Matcha is rich in L-Theanine, a rare amino acid that actually promotes a state of relaxation and well-being by acting upon the brains functioning. While stress can induce beta waves an excited, more agitated state, L-Theanine creates alpha waves, which lead to a state of relaxed alertness. And while L-Theanine is common in all tea, matcha may contain up to five times more of this amino acid than common black and green teas.

As an additional benefit, L-Theanine may help memory and learning and ability all the while inhibiting any possible side-effects from caffeine, a natural component of green tea. Therefore, a bowl of matcha promotes concentration and clarity of mind without any of the nervous energy found in coffee. Try matcha as a pick-me-up for the afternoon or anytime you need extra focus.

HOW DOES CHLOROPHYLL-RICH MATCHA HELP ME DETOX?

Green is truly the color of health. Matcha helps to safely cleanse and purge the body of harmful elements. Chlorophyll the element that gives green tea and other plants their signature verdant color is also a powerful detoxifier, helping to eliminate both chemicals and heavy metals from the body. And because matcha is carefully shade-grown, it is substantially richer in chlorophyll than other green teas, making it a superior daily detox. HOW DOES MATCHA TEA GIVE ME ENERGY WITHOUT THE JITTERS?

One of the most unexpected health benefits of matcha tea, is that drinkers experience a boost of energy throughout the day. In one study, researchers had thought that this was from the caffeine in matcha, but they found that it was actually the combination of matcha’s natural properties. Another recent study found that matcha even improved physical endurance by 24%.

Even if you aren’t facing a grueling workout, matcha can help you through the everyday marathon, whether it’s that project due the next day or getting the kids from school to soccer practice.